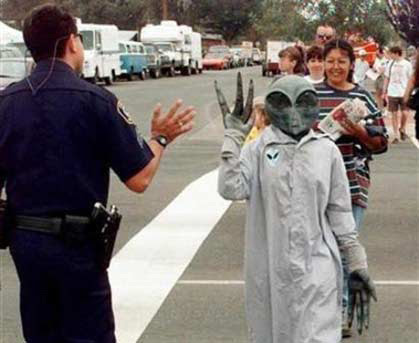 There really is no denying that there is intelligent life on other planets, there are billions of galaxies in the universe and it is highly unlikely that every single one of those planets are lifeless wastelands. I honestly do not think that any other planet in the milky way contains intelligent life and if there is then the beings are hiding very well. People argue that extraterrestrial beings could not make it millions and billions of light years to reach this planet. This is arguable because maybe some other planet has knowledge that greatly triumphs ours, excluding overlords of course. Also there is a good chance that on an alien planet, raw materials can be utilized much more effectively than any raw material that we have here on earth. I personally believe that there are foreign beings on this planet, and only elite members of society know about them, people such as John Cena and Barrack Obama probably know the truth about alien life. Maybe there is a country that has aliens helping them by giving them advanced technology of some kind. I also believe that there may be aliens in some sort of disguise, roaming through cities, gathering information for scientific purposes on their home planets. I will most likely touch on this topic more in the future, as usual, always question your government and authority figures.

Posted by Unknown at 6:32 PM No comments:

I would like to know what theories my audience would like to hear about. I don't want to write about something that is not going to interest anybody, I would like to write about something that is relevant and interesting. I plan to mainly write about news regarding proof that conspiracy theories are not just a giant load of steaming bullshit even though America's society would like you to think just that. I will report any conspiracy that someone comments and wants to see reported on. My goal as a blogger is to raise awareness for America's central government's lies as well as central governments in other countries that lie to their loyal subjects. I would like to put a lot of my focus on the fact that many powerful people from around the world are planning something that will control our life completely. We need to connect the dots that point to life as we know it changing in a very negative way, but I will talk about that later. Here is an off-topic idea. An organized religion, for example we will use Christianity. They believe that some spiritual being which they refer to as god, created everything and decides everything that happens to us. They also believe that a long time ago, a woman was given a child to give birth to by this god, and god choose this child to be very important. Later in his life he sacrificed himself for the human race or whatever. Then they believe that This man who sacrificed himself, was reincarnated, and they think that this will happen again as a sort of judgement day. The people that believe these things also believe that people like me are crazy and should be in a mental institution. But believing that a man came back from the dead just because it's written in a book that was written a long time ago is completely logical. The reason that we are crazy is because we believe things that are not widely believed. Soon people are going to have to face the fact that we are not just talking out of our asses. I will of course talk about this subject later, but for now please remember to comment on what you would like to see in future blogs. As always, question your government and authority figures

Posted by Unknown at 7:06 PM No comments:

The sightings started on Wednesday night when people on the Jackhead reservation saw bright lights in the sky. Later that night, military arrived in Jackhead and said that the object people saw was a military plane that was downed as a training exercise.

-google earth picture of the crash site. I think this may be the modern equivalent of the 1947 Roswell UFO incident. To me it appears that the Canadian military is trying hard to cover something mysterious up. Civilians are not allowed in or out of the area, people are being detained for taking pictures, calls are not going through to residents of that area. I personally believe that extraterrestrials have visited our planet before. Hopefully someone finds out the truth about what is happening out there, I also hope that this opens some non-believers eyes to the possibility of alien life on this planet. Remember, always question your government and authority figures

I am a personal believer in many conspiracy theories and think that people who simply shrug off anything that pertains to a conspiracy theory are oblivious to the world around them. People around the world are being lied to by their beloved politicians and have no interest in pursuing the truth. I am here to give you content that I personally believe in because I think its much worse to lie about an issue than make a mistake when explaining an issue. I hope that you will come to learn why I believe in these things. Always question your government and authority figures

Posted by Unknown at 6:44 PM No comments: